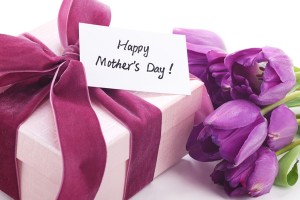 Celebrate Your Mom On Mother’s Day, May 12

The Greeks had Cybele, a celebration of their exotic earth goddess, a deity who was believed to have arrived in Athens riding a chariot pulled by lions to the accompaniment of boisterous music and serious, drunken partying.

The Romans had Hilaria to honor the mother of their gods. Lustful rejoicing and sacrifices topped the weeklong celebration program, but also featured were parades, abstinence from certain foods, a day of mourning, bloody whippings and finally, a day to wash up. Good that whippings are no longer a part of our celebration of moms!

Christians had Mothering Sunday, a day dating back to the 16th century when families reunited to visit their area’s central, or mother, church, usually with their moms. Workers got the day off to be with their families, and we’re sure there was a great sharing of casseroles. By the 1950s, people started to recognize the commercial potential of what had become known as Mothers Day. Now there’s no looking back.

In 1914, President Woodrow Wilson made Mother’s Day an official U. S. holiday, which is celebrated on the second Sunday of May. Here in the St. Petersburg-Tampa area this year, Mother’s Day is May 12.  Norway toasted its moms February 10, the UK on March 10, Hungary is coming up May 5 and Indonesia is holding off until December 8.

Our special day for moms is among the most commercially successful holidays here in the U.S., which certainly has had an enormous effect on the longevity of the occasion. Not so Children’s Day and, thankfully, Temperance Sunday.

In a nod to the Christian contribution of Mothering Sunday, churches report Mother’s Day attendance levels that are only surpassed by Christmas Eve and Easter. MOMS RULE!

Moms do life’s most important job. Be thankful. Let mom know in your own way how much you love her, and how appreciative you are for all she’s done for you. Kiss your mom!