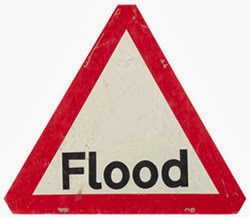 We recently posted a blog on the mushrooming costs to consumers of the Federal Emergency Management Administration’s (FEMA) National Flood Insurance program, and the trickle down effects resulting from federal legislation reforms adopted in 2012. The Biggert-Waters Flood Insurance Reform Act was designed to reduce the program’s nearly $24 billion debt, and to pass-on higher costs and decrease federal subsidies to those living in high-risk areas.

The real-life result includes flood insurance premiums increasing by 400% to 800%, prospective buyers backing out of the market, decreasing property values, plummeting home prices, mortgage defaults, declining tax revenues and increases in foreclosures. Not at all what Congress intended.

In late October we learned of a Congressional move to delay the law from going into effect for four years but without a date set for hearings. As a stand-alone bill, it has little or no chance of passing before Congress adjourns for the holidays.

However, a last ditch push is on to attach the delaying legislature to the National Defense Authorization Act, which is a pre-holiday “must pass” measure to keep our military funded for 2014. But it’s not a slam-dunk.

There are those in Congress who believe Biggert-Waters should remain in place as passed, and they are getting more and more vocal in their opposition to making any changes at all. Representative Maxine Waters, the California Democrat who co-sponsored the 2012 law, is not among them. She feels strongly that the law should be delayed until the problems leading to the unintended consequences are fixed.

What can you do?

Contact your representatives, and urge them to stop the decimation of the real estate market by attaching the delaying measure to the National Defense Authorization Act and passing it immediately. You’ll find your representative’s name below with links to their contact information.