The Lens – When No Means Yes & Yes Means No
St. Pete To Vote August 27

When it comes to The Lens, confusion is the only thing in focus.

On Tuesday, August 27, City of St. Petersburg voters will determine whether to build “The Lens” or begin again the process of designing and building its replacement. 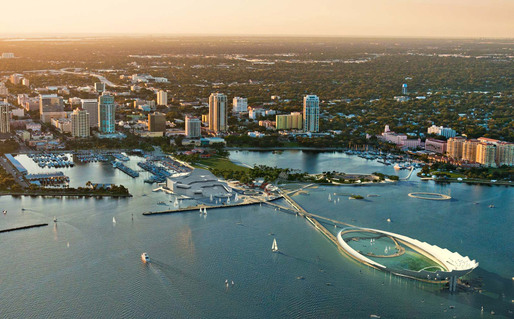 Since 1889, “The Pier” has been a popular destination for locals and tourists on St. Petersburg’s bay front. Originally built by the Orange Belt Railway as a downtown, waterfront tourist attraction, The Pier became an immediate hit. Since its debut 124 years ago, what over the years has been referred to as the Railroad Pier, the Electric Pier, the Municipal Pier, the Million Dollar Pier and now simply The Pier, has been rebuilt no less than four times.

Today, 40-years since its last reconstruction, The Pier is literally disintegrating, and a permit for its demolition is already in place. In 2005, the City of St. Petersburg dedicated $50 million for The Pier’s replacement. Estimates indicate that replacing and renovating the existing structure, aka “The Inverted Pyramid,” could cost taxpayers about $70 million. Since May 31, The Pier has been officially closed to the public.

Few disagree that the time has come to rebuild The Pier. The problem, however, is what to build in its place.

That issue may or may not be settled by St. Petersburg’s registered voters on August 27.

Vote “NO” To Keep The Lens

On one side of the issue is the “Build The Pier” group that believes St. Petersburg should construct a design by Michael Maltzan Architecture, Inc., popularly referred to as “The Lens,” which was approved by the City Council on May 17, 2012, following an international design competition and years of public input and debate. Proponents argue that aside from the innovative and controversial sculptural design of The Lens, the new pier will be rich in amenities such as restaurants, a floating dock/marina, an open-air amphitheater, ice cream shop, fishing areas, etc., and will become a widely recognizable symbol that will generate new tourism while helping move the city forward.

Vote “YES” To Stop The Lens

On the other side of the issue are the “Stop The Lens” group and St. Petersburg Mayor Bill Foster’s “828 Alliance.” Both factions believe the existing architect/engineering agreement between Maltzan’s firm and the city needs to be immediately terminated, and a new design competition commissioned with a review panel selected to make the final decision on what to build. It’s taken over three years to get to this point after public input, city council hearings, design competitions and jury reviews. Assuming it will arguably take at least as long for the second round to run its course, The Pier, as it currently stands, i.e. closed, could remain in its current state into 2016 or 2017, that’s if anyone can agree on a design.

At stake is whether to stay with the Michael Maltzan design, and build The Lens, or fire Maltzan’s firm and begin the design and review process all over again. The confusion about to how to vote comes from the wording of the ordinance before voters.

Following is the wording of the ordinance before St. Petersburg voters August 27:

“Shall an ordinance be added to the City of St. Petersburg’s existing ordinances that would require the City to send a notice of termination, within five business days of the effective date of the ordinance, to Michael Maltzan Architecture, Inc. to terminate the existing architect/engineering agreement between the City of St. Petersburg and Michael Maltzan Architecture, Inc. which agreement was approved by City Council Resolution Number 2012-233 on May 17, 2012?”

So a “no” vote sends the signal that yes, voters want to retain Maltzan and build The Lens, while a “yes” vote indicates that voters say no to Maltzan’s agreement and The Lens design. What could be clearer?

If you are a registered City of St. Petersburg voter, please be sure to voice your opinion August 27, and help St. Petersburg move forward, one way or the other.