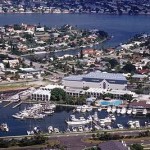 Native Americans considered the 15 islands that make up Tierra Verde at the southernmost tip of Pinellas County, Florida to be sacred ground. Rumors persist that the pirates Jose Gaspar, Juan Gomez and Jean Lafitte frequented the area, and may have left behind buried treasure. Today, Tierra Verde, or “Green Land,” is considered to be one of the crown jewels of St. Petersburg Florida Real Estate.

Surrounded by Tampa Bay and the Gulf of Mexico

Surrounded by Boca Ciega Bay to the north, Tampa Bay to the east and the Gulf of Mexico to the west, Tierra Verde is a 667-acre enclave of high-end single-family homes and condominiums that encompass the subdivisions of Entrada, Monte Cristo, Pinellas Bayway, Sands Point, East Shore and West Shore.

In the early 1960’s, Tierra Verde’s developers dredged the bottom of Tampa Bay, and deposited thousands of cubic yards of fill throughout the area. An extensive system of waterways was then created, and today Tierra Verde offers boaters unrestricted access to the area’s waters. This deed-restricted community boasts extra-wide canals, some as deep as 15-feet, which is a big selling point for owners of sailboats with deep drafts. And as a result of the original dredging and development plan, the Gulf of Mexico regularly sweeps the waterways clean, which may explain why a huge variety of fish and manatees call the area home.

If you’re considering purchasing a waterfront property, luxury home or condominium, take a look at St. Petersburg, Florida’s Tierra Verde community where prices range from between $150,000 to over $5 million.