One of our favorite neighborhoods is Treasure Island, it’s a mixture of “old Florida” and contemporary living. It boasts areas steeped in history, miles of white sandy Gulf of Mexico beaches, and access to all of the amenities that make this area part of Florida’s premier west coast.

Sandwiched between Madeira Beach to the north and St. Petersburg Beach to the south, Treasure Island is the epitome of a small Florida beach town that attracts visitors from both the U.S. and abroad. In addition to beaches, Treasure Island has great restaurants and bars, unique shops, and water sports & fishing.  In addition to it’s tourist attractions, it’s also a very desirable town in which to live, retire or lay down roots and raise a family.

Original residents date back to around 300 A.D., when the Timucan Indians called what is now Treasure Island their home. In the 1600s, Europeans started arriving, established a fishing industry and began harvesting turtles. Their influence is still evident. In 1848, what was called the “Great Gale” created John’s Pass on Treasure Island’s north end, creating two smaller islands, the Isle of Palms and Capri Isle, both interesting and attractive beach communities. 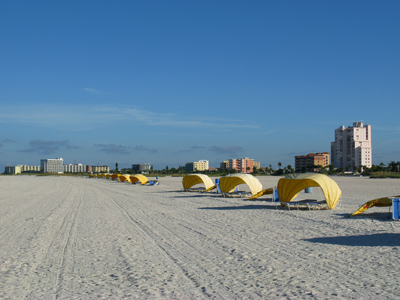 At the beginning of the 20th Century, the St. Petersburg-Tampa area experienced a real estate boom, and new residents and visitors were quickly drawn to our area’s fabulous Gulf beaches. (Eventually, included among them was the legendary Babe Ruth who maintained a beachfront home.) No bridges to Treasure Island existed at the time, so ferry service shuttled visitors back and forth to the mainland until the first bridge was completed in 1939. Following World War II, homes and hotels began springing up, and the City of Treasure Island was incorporated in 1955.

As to the name “Treasure Island,” it was a 1915-marketing ploy created by early property owners seeking to boost sales by burying and then “discovering” a few wooden chests supposedly filled with treasure. It worked.

Sure, the days of buying an acre of land for $1.25, as you could in the early 1900s, are long gone, but home prices remain attractive and value continues to be strong. Many homes dating back to the 1950s have been renovated over the years and blend well with newer construction. If you’re looking for a Florida beach town that combines history, charm, all the necessary conveniences and proximity to best of the St. Petersburg-Tampa area, consider Treasure Island where you can still discover a laid back Florida lifestyle.

Editor’s note: This post was originally published July 2012. It has since been edited for updated information and cohesiveness.